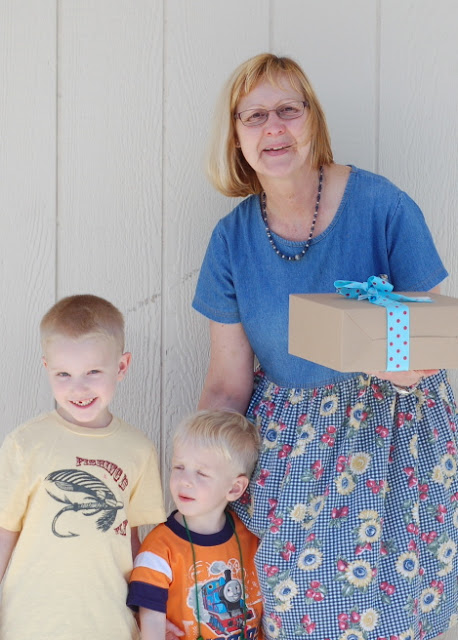 "I think she is about as big as you," my husband used to say as we drove past our new neighbors' house, commenting on her growing belly. It seemed as though our pregnancies were pretty closely aligned, but I wasn't about to just knock on her door and say, "Hi, I'm Erin. And look, I'm pregnant, too." Instead, I just silently hoped she was also having a little boy for my firstborn to play with.

Then, several months later, I saw her in the frozen foods aisle at the grocery store. The baby belly was gone. Instead, a little boy who appeared to be my son's age was seated in the cart. She also had an older daughter. Although I felt a little weird approaching a total stranger and saying, "I think we live on the same street," it seemed too perfect an opportunity to pass up. It turns out her name was Kathy, and her son, Corbin, was just a month older than my Wilson.

After that first meeting, our playdates were frequent. The boys hit it off immediately, or at least as well as almost one-year-olds can. It was so handy to have a playmate just down the street. The transition from working full-time to being a stay-at-home mom had seriously impacted my social life. Although I adored being home with my little guy, most of my friends still worked the 9 to 5. I soon found that I began looking forward to our regular playdates as much, if not more, than my son.

Kathy and I regularly spent weekday mornings taking the kids to story time, picnicking at the park, grabbing Starbucks while we ran errands at Target or just playing at each others' homes. She always seemed to understand when my little ones just couldn't sit still to make it through another story, had embarrassing tantrums in public or insisted on waiting in a ridiculously long line for the train ride at the farmers' market. I have never felt judged by Kathy, and because of that, I am probably much more authentic with her than with most of my other friends. When I have the occasional "I am thinking of running away to join the circus just for a break from the mommy madness" kind of day, I know Kathy will make me feel a little less alone in the journey.

Kathy even began walking with me in my attempt to shed pregnancy pounds following the birth of my second child, Henry. I so looked forward to these times together because it gave us a chance to really talk. The kids were strapped into their strollers or wagons and busy with juice and snacks, which gave us the rare opportunity for adult conversation. It was on one of these walks that Kathy off-handedly announced that there would soon be another little one in their family. I remember stopping dead in my tracks and asking "Really? You're pregnant?" She nodded and I hugged her. I was so excited for what was in store for her.

But, Kathy's pregnancy was not easy. As the boys busied themselves at the park several weeks later, Kathy shared with me that their first ultrasound revealed that the baby girl had some medical complications. Again, the only thing I knew to do was hug her. All babies are a blessing. Having worked with special needs children for many years, I was no less excited for her and her husband. But I knew the road ahead would be challenging, with many difficult decisions to be made along the way.

Earlier this week, baby Lara was born! She is so blessed to join such a wonderful, nurturing family. Kathy is quite possibly the most patient and attentive mother I know and her husband, Ben, is the only man I have ever met that genuinely loves newborns. Not to mention big brother, Corbin and big sister, Addy, who will be wonderful teachers and cheerleaders. Little Lara is already surrounded by so much love.

I think anytime you grow and carry another person for nine months, you deserve some pampering. But, in the craziness that comes along with any birth, mommies are often forgotten in leu of the precious new little one. How about we celebrate both mommy and baby with a pie?

Kathy's oldest daughter, Addy, is in a Daisy troop, which means we have several boxes of Girl Scout cookies around the house this year. I have a particular weakness for Thin Mints. Ever since I was a little girl, few things have tasted as refreshing as a Thin Mint straight from the freezer. So it is fitting that this classic cookie is the inspiration for my newest Bake Somebody Happy creation - Kathy's "Mint to Be" Thin Mint Pie.

I opted for a variation on a graham cracker crust, rounding out the traditional cracker crumbs with an entire sleeve of Thin Mints pulsed in the food processor. After adding the sugar and melted butter, I pressed the crumbly mixture into the pie tin, using the bottom of a drinking glass. I baked the crust until crispy and fragrant.

Then for the filling. I brought egg yolks, sugar, cornstarch, salt and whole milk to a low boil, whisking constantly to avoid scrambling the eggs. Meanwhile, I melted a combination of semisweet and bittersweet chocolate in a double boiler. Once the custard had thickened to a pudding-like consistency, I pushed it through a sieve before folding in the melted chocolate, butter, vanilla and peppermint extracts.

Once cooled, I piled the thickened chocolate pudding high into the cookie crust.

I spread a generous layer of the peppermint whipped cream over the top of the pie and finished it off with a sprinkling of crushed Thin Mints. A whole cookie placed in the center of the pie gave a wink and a nod to its inspiration.

In searching for a playmate for my son, I found a friend myself. Whether it's meeting your dearest friend in the young family who just moved in five doors down or welcoming the sweet new soul that adds a "plus one" to your family, the best things in life are just meant to be.

"The Thin Mint's sleek simplicity is its greatest virtue. No fillings, chips, or nuts distort the message, one of mint, pure and clean, fused with rich chocolate." - Forbes
Posted by Erin at 8:45 PM No comments: