Tim's "Let Me Buy You a Beer" Guinness Pie

Creating a logo for your best friend's wife's not-for-profit pie blog does not pay well. As in, it does not pay at all. Unless, of course you are willing to accept payment in pie.
When I began this little blog of mine and my first pie was merely a twinkle in my eye, my husband offered, "Tim will make a logo for you." Tim is Will's closest and oldest friend, dating back to elementary school when they lived on the same street and passed many an afternoon riding bikes, playing basketball and otherwise causing preteen mischief. Twenty-something years later, their friendship has stood the test of time, although their boyish antics have evolved ever so slightly.

So began my logo endeavor.
Now, if you have known me for any length of time, you know that I am two things - a perfectionist and terribly indecisive. As you can imagine, these things do not go well together.
But Tim, a graphic designer by trade, patiently sorted through the sample logos I had accumulated, listened to me babble on about lattice crust, handwritten fonts and vintage color templates, and graciously tolerated my "I don't know"s. He tweaked, improved, offered more choices and tweaked again. For months, emails went back and forth, with different pie slices, backgrounds, banners, fonts and colors. Until the final email when I opened up the attachment and saw this - my logo! 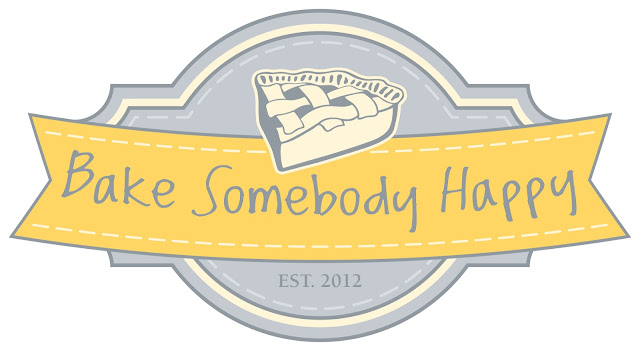 In retrospect, settling on a logo was not unlike wedding dress shopping or looking for a new home. It was simply a matter of not knowing exactly what it was I was looking for until I had found it. And there it was! My logo! I was so happy, I cried. . . and continued to sneak peeks at the final product every half hour or so for days. I was a bit smitten.
So now, thanks to Tim and his design talent, my little neck of the Internet woods has a beautiful new logo, my brown cardboard pie boxes will be cheerfully adorned with Bake Somebody Happy stickers and I may even have a T-shirt made. Or maybe a apron. Or maybe both.
Yet, there remains this little issue of payment. I mean, how could I ever adequately thank Tim for the time and effort he so generously put into bringing my vision to life? How about with a beer - or rather a beer pie. Pull up a barstool and grab a cold one. I've got Tim's "Let Me Buy You a Beer" Guinness Pie comin' right up.
All this talk of beer got me thinking about bar snacks. So, I opted to replace my traditional pie crust with a take on a graham cracker crust, only using pretzels in place of their more traditional cracker cousin. It seemed to me that the saltiness of the pretzels might be the perfect accompaniment to the rich, chocolatey Guinness filling I had in mind.

I threw a couple of handfuls into the food processor and pulsed them until coarsely ground. Then I added brown sugar and a slightly obscene amount of melted butter to bring the crust together. Into the oven for ten minutes and there it was - the perfect combination of sweet and salty.

While the pretzel crust cooled, I prepared the pudding by gently heating heavy whipping cream and Guinness on the stovetop before melting in chunks of bittersweet chocolate. I whisked together egg yolks and sugar and gradually introduced the resulting paste into the warm ganache before adding cornstarch to thicken.

Then I poured the creamy Guinness pudding into the cooled pretzel pie crust.

While the pudding chilled, I set to work preparing a marshmallow meringue topping. I began by creating a reduction of the remaining Guinness in a saucepan over medium heat.

Then I dissolved sugar into a combination of egg whites, water and salt to create my first ever meringue. I must admit, I felt rather fancy.

I added quartered marshmallows to the meringue and whisked until melted and thickened to the consistency of marshmallow fluff. Once combined, I stirred in the Guinness reduction and poured the sticky meringue over top of the entire pie.

Marshmallow always begs for a little toasting, so I placed the pie under the broiler for a bit of color. Between you and me, I may or may not have slightly scorched this pie, but nothing a sprinkle of powdered sugar couldn't fix.

Tim was the first friend I ever met of my husband's, nearly nine years ago. Over the years, he has been a consistent and positive presence in our family's life - bringing thoughtful gifts when our boys were born, attending more than his fair share of toddler birthday parties and joining our often rowdy crew for dinner. My oldest speaks fondly of how Mr. Tim wears his sunglasses on top of his head, goes fishing with Daddy and drives a truck. These things are terrifically cool when you are four years old. But, I have to admit - even as an adult, I think Tim is pretty cool.

Tim will be an awesome dad someday. In fact, Will has specifically instructed that if something should ever happen to him, I am to make sure that the boys continue to have a relationship with Tim to learn all of the "man things" he would have taught them - fishing, home improvement and the like.

They say all of the good ones are taken, but I am here to tell you that some of the best are still out there. Over the years, I have tried, albeit unsuccessfully, to set Tim up with Mrs. Right and he has tolerated my meddling nicely. I undoubtedly will continue to meddle in all things love, if only for the fact that some great girl out there is missing out on this great guy. I mean, who else upon finishing their slice of Guinness pie says, "I feel like I should do something nice for someone." Um, hello. Being such a nice guy is exactly what landed you this pie in the first place. 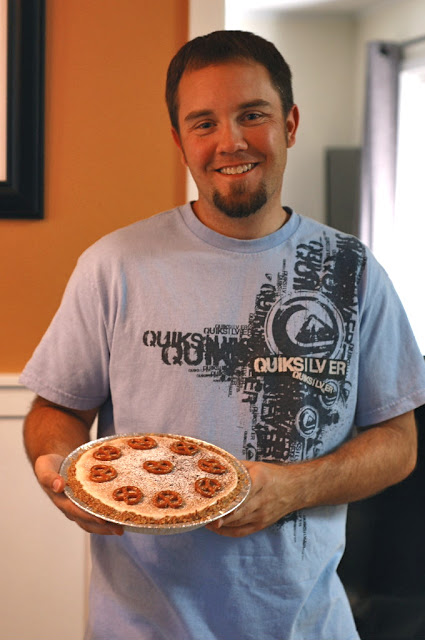 "The mouth of a perfectly happy man is filled with beer." - Egyptian Proverb
Posted by Erin at 8:12 PM