One of my greatest joys as a parent has been seeing the world through my children's eyes - the undeniable magnetism of a train, the jaw dropping vastness of the ocean and perhaps most pertinent to this time of year, the absolute magic of Santa. This year, I find myself soaking up the far-off twinkle in Wilson's eyes at the mere mention of Santa and his reindeer and Henry's cautious, wide-eyed trek to Santa's lap, for I know Christmases like these are numbered.

Our family has been so blessed to have annual, in the flesh visits from Santa (and often Mrs. Claus) on the afternoon of Christmas Eve. Every year, I eagerly anticipate the look of awe on the faces of my boys and their little friends as the front door swings wide open - amidst cookie decorating and hot chocolate sipping - and the magical sound of jingle bells and "Ho-Ho-Ho"s fill the living room. It is absolutely one of my favorite nights of the year.

There is an undeniable magic in sitting on Santa's lap and putting in your last minute gift requests, just before he has to dash off to the North Pole to begin his busiest night of the year. Yet, Santa is never rushed with our flustered little ones, barraged by a flurry of camera flashes and reminders to "smile." He has nothing but time for those who still whole-heartedly believe in his magic. 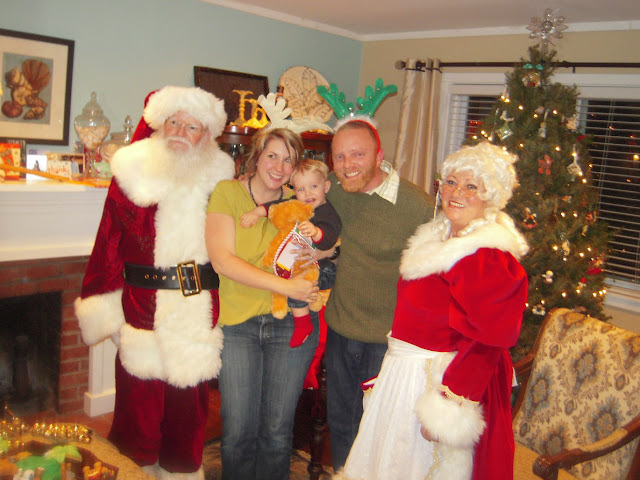 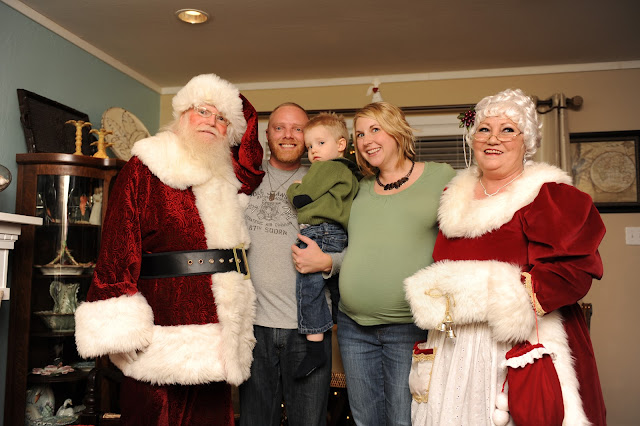 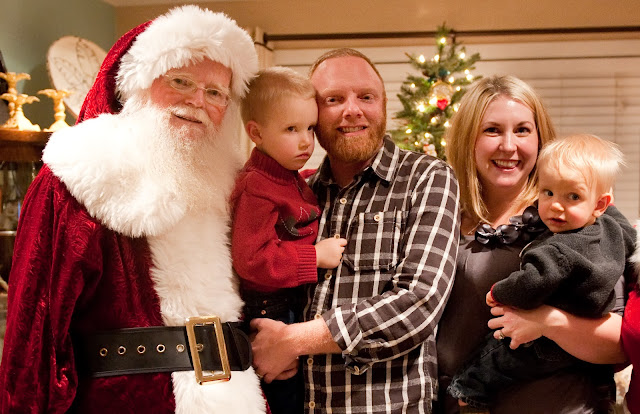 Each year, after all the requests have been made, the pictures have been taken and Santa has headed back to the North Pole, just before we head to bed, we set out the traditional milk and cookies for Santa. But this year, I thought we might mix things up a little. I mean, how many Christmas cookies can the big guy really eat? So, here is our family's take on milk and cookies, a la pie - Santa's Milk (Er...Eggnog) and Cookies Pie.

The boys and I began with a sugar cookie crust, working granulated sugar, butter and an egg yolk into a paste using the back of a fork. Once combined, my little guys took turns measuring in the flour. Finally, I emptied the bowlful of crumbly dough into the tin and let the boys go wild pressing it into the bottom and up the sides (and all over the counter). Into the oven until golden brown and ten minutes later, cookies...check.

Then for the filling - or the "milk" portion of the pie. In keeping with the holiday spirit, I opted for a more festive, grown-up take on milk. So the boys and I whipped up our first ever batch of homemade eggnog (minus the alcohol) in preparation for our holiday custard.

Using my hand mixer (boy is this thing useful!), we beat granulated sugar into egg yolks until dissolved. Then we whisked in whole milk and heavy whipping cream before grating in a sprinkling of fresh nutmeg.

Meanwhile, in a separate bowl, we beat egg whites and a spoonful of sugar into stiff peaks and folded them into the yolk mixture.

And lest you think I have this whole baking with little ones thing down, when I say "we," I mean me with a side of "When can I have a bite?" on repeat, little fingers drawing designs on the table in sugar and other general unsolicited "help."

Then, just because I feel like the whole spirit of this blog is to give my loved ones pies I have actually created with my own two hands (or our six hands, in this case), we made our own homemade vanilla pudding mix. My "helpers" and I whisked together granulated sugar, cornstarch, milk powder, salt and the seeds of one vanilla bean.

Then for the assembly. I combined the homemade eggnog, milk, scratch-made pudding mix and freshly grated nutmeg on the stovetop until thickened. Once cooled, I poured the filling into the cookie dough pie shell, topped it with some whipped cream and sprinkles (because what is a Christmas cookie without sprinkles?) and placed it in the refrigerator until the man in the red suit made his Christmas Eve rounds.

Santa is a busy man, especially on Christmas Eve, what with sleigh packing and checking his list twice. Yet, somehow, he always seems to make a little extra special time for the little ones in my life. And for that, I am especially grateful. Because all I want for Christmas is to share in the magic of Santa with my boys, once again. 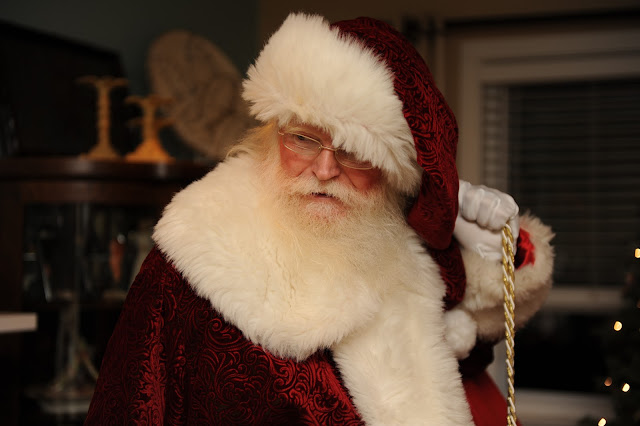 "Peace on earth will come to all
if we just follow the light
so lets give thanks to the Lord above
that Santa Claus comes tonight."
- Here Comes Santa Claus
Posted by Erin at 3:57 PM