There are certain people that if they had not crossed your path, the trajectory of your entire life would have been very different. Tom and Adrienne are these people for me.

I first met the Redeagles nearly ten years ago. I was working as a child development specialist in a home-based early intervention program when I took a new little girl named Layne onto my caseload. All I knew from the paperwork the regional center had sent my way was that Layne had Down Syndrome. I had long thought that people with Down Syndrome were among the most special people in the world. God just made them a little better at enjoying life than the rest of us. What I did not know was that meeting Layne would so drastically change my life.

I instantly fell in love with Layne and grew quite close with her family. Her mother, Adrienne, and I chitchatted about life and love (or the lack of it on my end). Adrienne was busy planning a wedding to Layne's dad, Tom, and as is often the case with people that have already found "the one," they soon started scheming to set me up with another of their single friends. I had been on a couple of awkward and not particularly successful blind dates and wasn't eager to repeat the process. Also, didn't this blur personal and professional lines? I tried to blow them off.

But, one evening as I drove to meet Adrienne for dinner, she called my cell phone and said, "I hope it's ok, but one of Tom's friends is coming, too." Ugh! I had been set up! But, it was too late to back out.

Tom is an unlikely matchmaker - a reserved electrician with a penchant for golf and designer clothing. But, when I met Tom's friend, Will, I instantly liked him. Actually, I think it was just about as close to love at first sight as you find outside of the movies. A year and a half later, we were married. And, now, nearly nine years after that first awkward introduction, we have two amazing little boys.

My husband can tell many a tale of the trouble Tom has seen (and caused) since they first met so many years ago in junior high. In fact, as parents we often joke that we dread the day one of our sons brings a "Tom" home. But, lifelong friends are hard to come by and often come in unexpected packages. Tom is one of the dearest friends Will, and now I, have ever known.

The path for the Redeagles has not been without bumps and a couple of detours, but as time does for so many of us, the rough edges have smoothed and softened. In recent years, they have had their fair share of reason to celebrate. We were honored to share their excitement in the birth of our godson, Drew, last year. And I am so proud of Adrienne's college graduation with a masters in social work and a new job at the very company I was working for when I met them.

But, what to make? Tom is a meat and potatoes kind of guy. He makes the most amazing BBQ and cheesy potatoes worthy of breaking any diet. But, he does have one weakness. Dessert. Every time we are invited over for dinner, chocolate cake is sure to follow - or chocolate chip cookies, or chocolate ice cream. You catch my drift. So, I knew chocolate was key. Throw in a few almonds and marshmallows, and you've got yourself a Redeagle Rocky Road Pie.

For this concoction, I started with a graham cracker crust. I honestly don't know why anyone would buy the pre-made crusts that have been sitting on the store shelves for who knows how long when smashing graham crackers to smithereens is so much fun. And, apparently, loud. My four year old called me in and asked if I could be a little more quiet. He was trying to sleep. Whoops. Sorry. Who knew pie making was so disruptive? 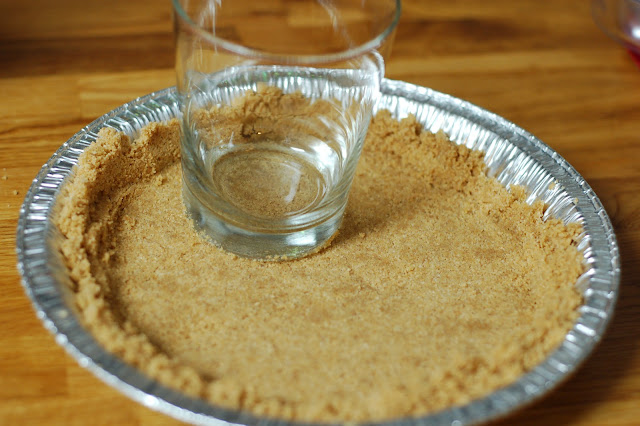 Then, I made my first double boiler to melt the chocolate gently without scorching it. This pie making adventure has been so full of firsts. Like my first ganache. Yeah, that's right. I can just whip up a ganache now. No problem. 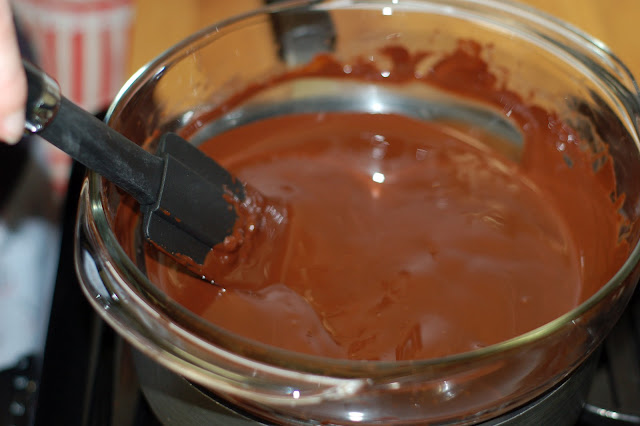 I roasted and salted the almonds, chopped them up and piled them in the pie shell with a generous helping of marshmallows. Then, I poured the ganache over the top and put it into the fridge for an hour to set. 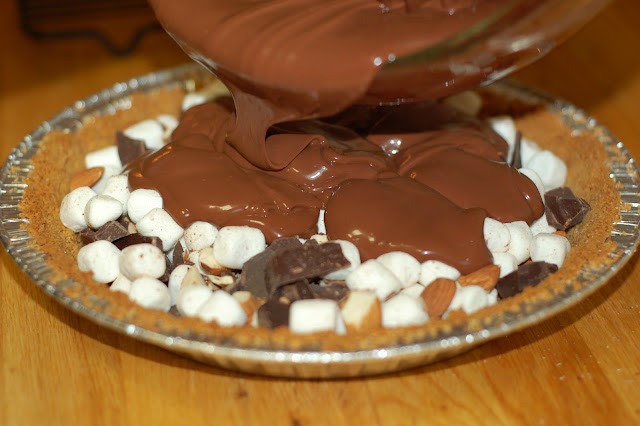 As soon as the timer dinged, I headed back to the kitchen for my favorite part - the finishing touches. I arranged whole almonds and marshmallows over the top and thought I was just about done when my husband said, "I think you should torch those marshmallows." Well, who does he think I am? It's not like I just have a blow torch sitting around. But, he was right, and the oven broiler set to low worked just fine.
And, while we're at it, why not drizzle the leftover ganache over the top? And, sure, chocolate shavings, too. The more, the merrier. Next, I am going to conquer the chocolate curl. 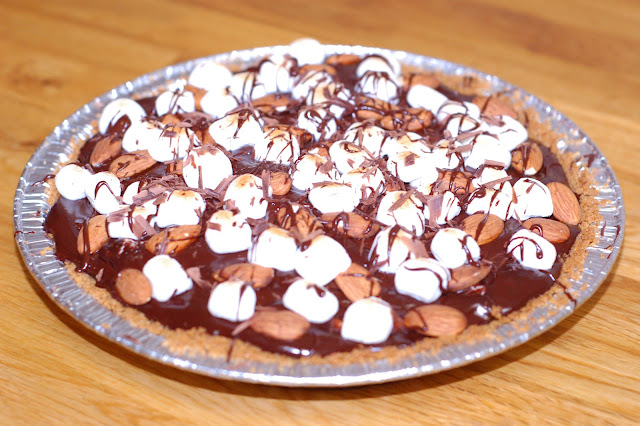 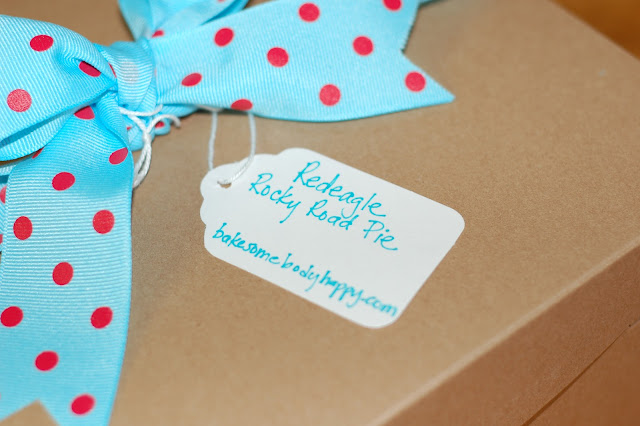 Sometimes it's conquering the obstacles in life that makes you who you are. Here's to all the bumps in the future being covered in fluffy marshmallows, toasted almonds, and melted chocolate. I will forever be indebted to the Redeagles. And no, I don't quite think that a pie is a sufficient enough "thank you," but, it's a start. 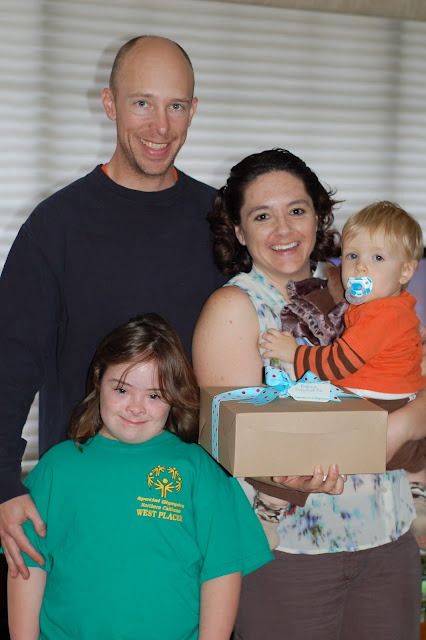 "There is nothing better than a good friend, except a good
friend with chocolate." - Linda Grayson
Posted by Erin at 3:12 PM